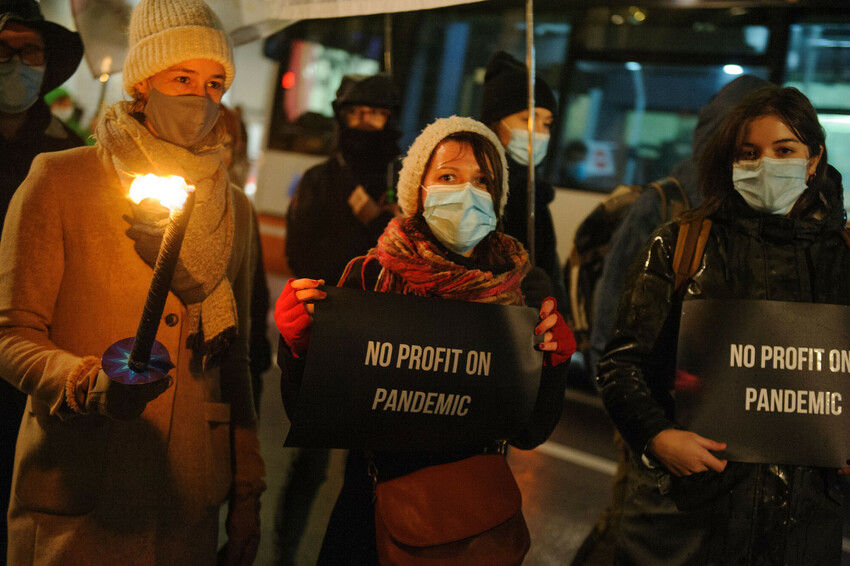 On Tuesday, November 30th, 150 people held a funeral procession in front of the European Parliament in Brussels, bringing coffins to the European Federation of Pharmaceutical Industries and Associations to mark the rate of deaths from Covid-19 around the world. Campaigners say the death toll is well in excess of where it could be, because European governments are refusing to lift patents on life saving technologies. « If our governments would be seriously concerned about vaccination rates, it would take responsibility to ensure an equal access to Covid-19 vaccines in the rest of the world”

“We are ashamed that our political leaders are among the last opponents to a just solution to end the pandemic and save lives. Although the development of Covid-19 vaccines has been largely funded by public money, corporate monopolies are creating an artificial shortage of Covid jabs. For over a year, European leaders, including the Belgian government, have quashed pleas from low and middle-income countries to waive patents and millions have died in the process. Given our failure to export or supply more than a tiny trickle of doses, the least we can do is get out of the way of others producing their own vaccine. Failing to act will shame Europe and the pharmaceutical sector for a generation or more. »

With this quote, campaigners criticise the fact that an average of 10,000 people have died from Covid-19 each day that the European Commission has blocked attempts to waive intellectual property for coronavirus vaccines and treatments, officially totalling 4 million deaths over the last year, though experts believe the real total is likely much higher. Less than 5% of vaccines distributed globally have gone to low-income countries, many of which are left waiting for donations while rich countries roll out third jabs to their already fully vaccinated populations.

On November 30, global leaders were supposed to meet in Geneva during a Ministerial Council of the World Trade Organisation where the proposal made by India and South Africa to temporarily waive all Covid-19 related intellectual property rights would likely have come to a conclusion. However, the meeting was postponed due to new travel restrictions caused by the Omikron variant.

The ‘TRIPS waiver’ would allow global south countries to produce Covid-19 vaccines patent-free, making use of the huge spare production capacity around the world. After receiving near-unanimous support from low and middle-income countries and the head of the World Health Organization (WHO), Dr Tedros Adhanom Ghebreyesus, the United States and Australia, the European Parliament reaffirmed its support for ‘the waiver’ during a vote on Thursday, November 25th. “The European Commission should respect the democratic decision made by the European Parliament”, campaigners respond.

Public health, labor, development and other civil society organizations are holding events worldwide, leading up to and during the ministerial, to put pressure on governments to agree to a comprehensive TRIPS waiver. Pharmaceutical corporations are relying on the few countries that remain opposed to block a waiver and instead promote meaningless “declarations” about trade and health. The ‘No Profit on Pandemic’ campaign calls European citizens to sign a legislative petition to bring their demands to the European Commission.

Epidemiologists have warned that global vaccine inequality threatens to undermine our current generation of vaccines, while a report from the Wellcome Trust and Institute for Government warned that virus mutations will « chip away » at the protection offered by vaccines. Despite the investment of at least $8 billion in taxpayers’ money, Moderna, Pfizer and BioNTech are making $1000 per second in profits by selling the vaccine.